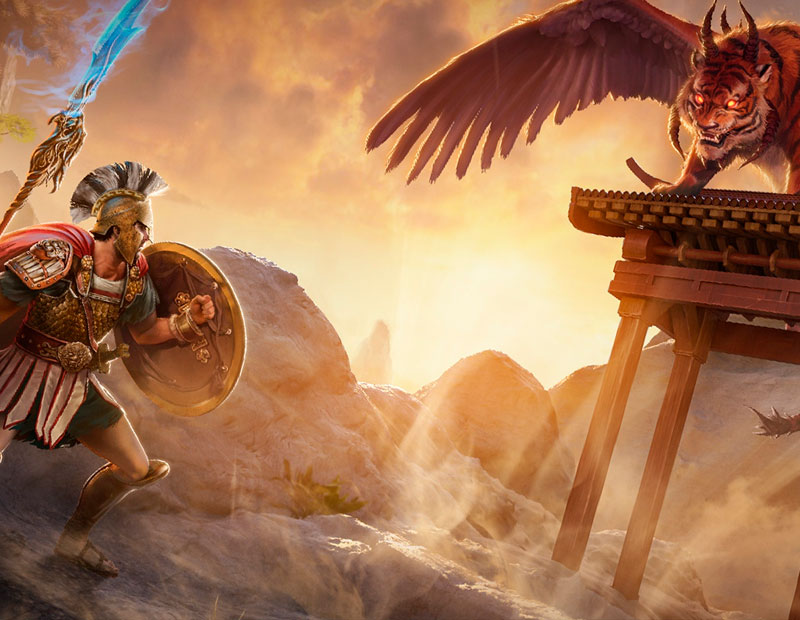 New features:
Curse Shrines
Curse Shrines would be an area in the gameworld, where unique shrines exist that can place a certain kind of curse on the player in exchange for other rewards.

Once a Curse is activated it will stay active until the player deactivates it via one of the cleansing shrines. The shrines are located in Helos at the very beginning of the game.

A new currency, Electrum, is gained from killing monsters with curses active. The more Curses are on the player the more Electrum is being provided. Electrum is a new currency that players can Transmute later into special Orbs that will give players special gears.

Note: Orbs containing items from any expansion that the player does not own, will still drop items from those expansions. However those items will be unusable until the player has acquired the required DLC.
Description of the Orbs mention a key , this key is not expected to drop for now;

Added audio/visual indicator when an Epic or Legendary item is dropped: the item icon and the name of the item will appear on hover on the Mini Map, and the audio indicator is heard when the item drops from killed mobs.

Visual updates and issues fixed:
Fixed issues with black void appearing instead of fog in multiple regions (Olympus, The Great Wall, Temple of Poseidon)
Fixed an issue where item descriptions could stay on the screen while the player moves or zooms in/out
Urns/Pots; added dust particle effect when opening
Created new Icons for the Shrine Debuffs

Fixed pathing and other accessibility issues:
Fixed pathing inside wall sections of The Great Wall to prevent player clipping or getting stuck
Fixed multiple pathing issues in various regions of the AE, where a player could fall through a bridge and get stuck underneath: City of Delphi, Knossos, Parnassus Hinterland (Act I), Artisans Quarter in Memphis (Act II), City of Chang'an, Jinghe River Valley, Jade Palace (Act III), Celestia (Act IV)
Fixed multiple pathing issues, where a player could fall off the dock into the water: City of Megara (Act I), Rhakotis (Act II), Shores of Scandia (Ragnarok DLC)
Fixed issues with pathing in the Dvergr Mines (Ragnarok DLC) causing a player to drop under the playable area
Added cage door to the secret passage in AE, to prevent players from getting stuck
Fixed an issue with a chest spawning in the wall inside of Great Hall of Propontis

Other fixes:
Fixed issue with: Changing HUD Style to Titan Quest will cause problems with the third tab and player won't be able to open it;
Added loot Orb to FeiYi
Fixed Global Multipliers to show for DOT damage types : Burn Damage, Frostburn Damage, Electrical Burn Damage
Fixed issue where Client was not able to purchase Orbs from Electrum Vendor
Made Two decimal long global multipliers
Fixed issue with: Player able to clip through the newly added stairs in Helos;
Fixed global multipliers on Life and Energy leech
Fixed issue with: When a player clicks on the scroll for the first time in Helos where the new shrines are it reads normally, but when clicking on it a second time it won’t appear normally. It disappears every time a player tries to read it;
Fixed: Spellbreaking enemies causing players to lose shrine debuffs/buffs;
Added a modified "trap resists" skill without Mana Drain Resistance. Replaced "trap resists" skill on any summoning Obelisks with this new skill. (The passive skill is just a modified copy of the "trap resists" skill. The one difference being that it no longer grants the Drain Resistance.Not a crucial change, but nice to give skills like Chi Realignment a bit more use. And these "traps" obviously use spirit magic rather than being mechanical, so the immunity is not justified.)
Tweaked obelisk summon skill mana costs. Tweaked obelisk mana pools & regeneration (Now also adjusted costs of summoning to always be above the regeneration rate * cooldown, so obelisks slowly run out of mana and (more importantly) slow down when mana drained. > Collecting enough mana for one summon (if not drained again) takes about 20s on all difficulties.)
Hero monsters receive 50/100 extra Defensive Ability in Epic/Legendary
Boss monsters receive 100/200 extra Defensive Ability in Epic/Legendary
Gave standard Undead resists to Elysian shades
Improved visual around city of Megara
Polished Athens city visual
Added missing vitality damage to Gates of Hell unique shield
Fixed: On the new 3rd UI tab “Attack Damage converted to Health” does not fit the window space
Fixed: When clicking on one of the three tabs in the character inventory menu it makes a sound. However our newly added third tab makes a different sound than the other two.
Changed The Army on the March sword to be of "Fast", not "Average" speed.
Changed Ahmoses Ceremonial Axe from “Average” to “Fast” speed.
Multiple small misspellings fixed;
Added +10% Total Damage stat to Chiyou’s Fall;
Fixed sarcophagi in Epic/Legendary Gadir Necropolis dropping normal items
Increased drop quality of the more rare Necropolis sarcophagus type
Increased item drop chances on Mudmen
Fixed an issue with TQ Workshop tool not handling correctly item ids larger than max number possible with int32
Removed login window in the Main Menu
Fixed an issue where, if the Auto-Party option was enabled on game hosting, a player would automatically return to the party right after being kicked out of the party: if this option is enabled on hosting, the host can now only ban the player from the session altogether; if the Auto-Party option is disabled, when kicked out of the party, the player remains in the game session and stays out of the party, unless invited again
Fixed a bug on teleporting where players would sometimes be teleported to a wrong location, seemingly random
Fixed an issue where an unpleasant noise could be heard if a player opens and closes loot menu with a gamepad in a quick succession
Added failsafe feature to Tartarus, to save player’s progression in case of a crash
Updated proxy placements within EE Egypt dungeons for better variety and gameplay
Reduced Ceremonial Axe/Armbands Mi drop chances further (specifically from quest related Wraiths located in the Funerary Temple Ruins)
Reduced Fallen Seers Mi staff drop chances from Chinese Wraith’s
Traps: Swapped Scorpion and Spider spawn mix for Scarab spawns
Several localization fixes in different languages
Undead monsters such as: Wraiths, Zombies, Ghosts, Rumor Monsters had the normal Undead resist skill, with an additional Negative 30 Life Resist in their base skills.Then Ragnarok modified them, gave them Ghost resist skill, which only has 50 Life Resist, but they got rid of the -30 Life Resist in the monsters base skills. We brought back the Undead resist for them.